Is this the real life? Is this just fantasy?

You caught word from a catholic priest in Tabor looking for an enterprising team needed for a risky and “sensitive” delivery. Whether you were short on money, curious what risky endeavours a priest might be involved with, or just wanted to catch up with an old friend in the crew, you pulled your group together on short notice from those available in the city. The priest, Brother Andrej, explained that you were to take these two provided waxed sacks of gunpowder, each about the size of a dog, to the Adamite sect hidden in the forest two days west of Tabor. They would pay you in gold dust, which you would bring back to him and he would exchange it for your payment in coins. After agreeing on your payment, he gives you vague instructions to find the Adamites and a warning to keep the sacks of gunpowder dry and away from flame.

You set out from the busy city early the next morning and cross paths on the road with many merchants and farmers. But as the shadows of the day grew longer, and the wilds more untamed, fewer and fewer folk passed you by. You made good progress, until it was time to turn off the well-trod road and into the pine forest. With the sun setting, and no farm houses by the river you were following up-stream into the hills, it meant a cold night spent sleeping on the hard ground. You found a ruined stone wall, perhaps it was something important once, but last night it made for a humble wind break.

When dawn comes the grass and pines are heavy with dew, and the crisp songs of morning birds carries on the air. The last of Brother Andrej’s instructions to find the Adamites was to follow this river up-stream into the hills where they had made their village. It will be a hard half day of hiking, and you know better than to march on an empty stomach. 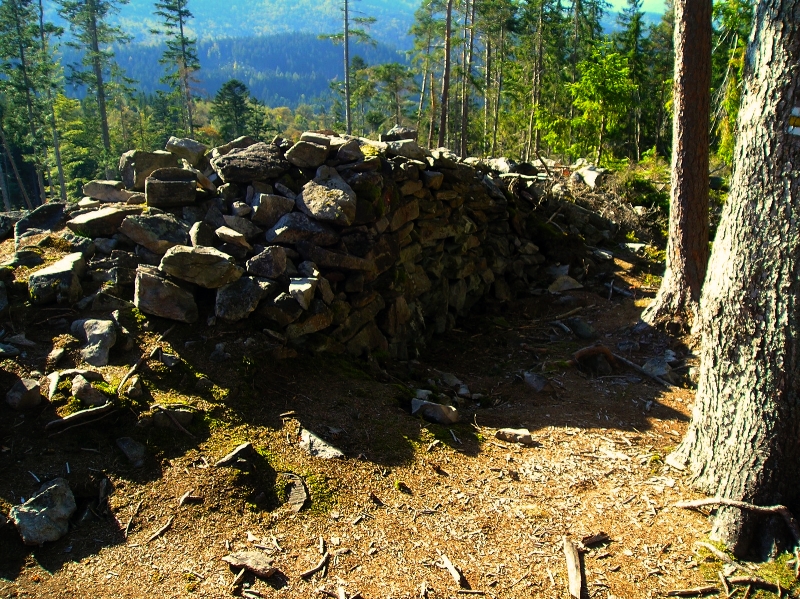 Dalibor rose from sleep feeling groggy and sore. After stretching briefly he moved to check if the remains of last night's fire were still warm, and if any of the other's had risen yet.
Top

It's not that he was an enthusiastic early riser, but the company of humans was uneasy, more so than that of wild animals. If you think about it, it makes sense. Or maybe it's just a matter of custom, maybe all is... I need to restock on rocks, thought Daleko while feeling his satchel.
Top

Mattheo was already up, patting the massive oxen whose duty it was to pull their cart, and talking softly into its ear. He liked spending his mornings alone. At times he felt like the dumb masses of muscle were the only creatures in the camp that actually understood him. Then again, they had spent a lot of time together. Time on the road was often lonely and the Oxen were certainly a better conversationalists than most humans. No one else listened with such an intent, and Mattheo revelled in that. Sometimes he could speak for hours, and the oxen hung on to every single word.

Earlier he had exchanged somewhat polite nods with Daleko and now he watched as the rest of the camp slowly stirred awake from their slumber. By the time Dalibor was up on their feet and checking the fire, he had already tethered the beasts to the cart and found himself a pot and a wooden spoon. With a mischievous delight, he gave his best impression of the bells of the church of Saint Gallen. Even then it wasn't a particularly good rendition: there were mornings when you could feel the tune of the massive bronze bells shake your beer-drenched bones even through the thick walls of the Karolinum. He grinned at the thought of the misery that a younger man had once endured and hit the pot a few more times, as if to punish the poor sod.

"There's some stew still on the fire", he shouted and absentmindedly lobbed the utensils back to the back of the cart, where they rolled off a sack of gunpowder. "You can thank the Rag-lord, in part, for that. But eat fast! There's a hard day ahead of us, and I don't want to keep our friends waiting!"
Top

Arnost was still stretching in his makeshift bed when an incessant banging, faintly reminding of a bell, bludgeoned his ears.
“Father, I believe you are not the one who is supposed to raise the dead, so please cease your attempt.”
He found his bowl and prepared to eat.
Top

Stepan jumped from his pallet with a yelp at the sound, and made it only as far a getting his goat foot latched on to his crossbow before he realized he was standing among snickering friends and not an active ambush.
He sets his weapon aside and grabs the nearest vessel and heads towards the stew.
"how's it taste Arnost?" he asked trying to talk past his embarrassment.
Top

Waking up weary and still somewhat sleep-deprived, Jaska pokes his head out of his small tent to the sound of a clanging pot, a slight groaned sentence from Arnost, and chirping birds. Grabbing his satchel and groggily stepping out to sit down, he grabbed a beaten book and a quill from his little bag and started writing his chicken scratch once he sat down.
“Y’know a man needs a decent morning's rest after watching for most of the night, when Daleko woke early I was nearly out of it,” Jaska said in a somewhat dazed state while writing.
Top
Post Reply
7 posts • Page 1 of 1

Return to “The Bohemian Racket”